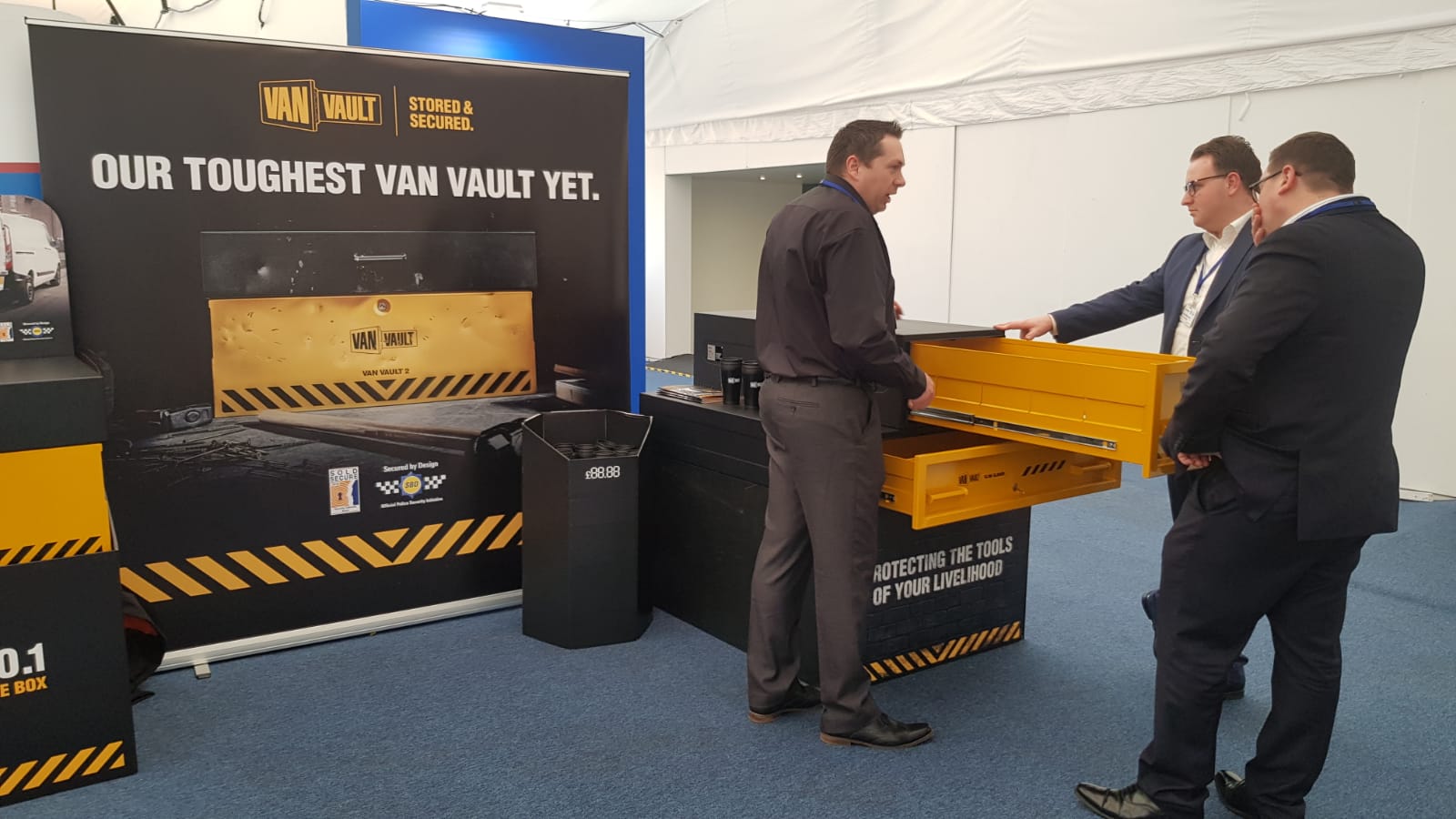 The Van Vault team recently gave members of the police force a special preview of our brand-new vehicle range.

We were delighted to be part of an elite group of brands and manufacturers invited to attend ATLAS 2019, Secured by Design’s (SBD) two-day annual, national Crime Prevention event in the Cotswolds.

SBD is a police-owned organisation that works on behalf of the Police Service throughout the UK to deliver a wide range of crime prevention initiatives. This exclusive event is attended by crime prevention design staff who are based in police forces around the country. Around 300 Designing Out Crime Officers (DOCOs) attended – who all deliver SBD at a local level. It is a unique opportunity for officer training and to share best practice across forces.

Van Vault was present for the first time, having only recently been accredited by SBD for our new Van Vault range. As a new member of SBD, and the UK's first vehicle storage brand to be accredited by Secured by Design this was the perfect event to showcase the new range to police representatives as well as hear first-hand their experience of van tool theft.

To achieve SBD status, products are subjected to vigorous testing and auditing by an accredited third-party organisation before being allowed to carry the SBD logo – this is the only way for products to obtain police accreditation for security related products in the UK.

Cressida Dick CBE QPM Commissioner of the Metropolitan Police Service introduced the event and talked about “preventing the predictable” and the fact that “the nature of crime doesn’t change” and welcomed all of the SBD partners in attendance.

Deborah Hunt, Marketing Manager at Van Vault said: “With a van break-in taking as little as 10 seconds, the new range has introduced key enhancements, which are fundamental in making it much harder to steal valuable power tools and equipment. Tool theft is a massive issue facing police forces and everyone we spoke to at ATLAS reported that tool theft was a huge problem in their area and were delighted that with Van Vault they now had a robust solution to promote within their communities.“

SBD was created in 1989 following the housing boom when there was a huge and urgent demand for housing. Estates were built quickly and often without any basic security. Burglars found externally glazed windows and doors relatively easy to enter as all they had to do in many cases was lift out the double-glazing and climb through the frame. In the wider built environment, sky walkways and subways incorporated into many large estates were designed to keep apart pedestrians and the rapidly growing number of vehicles. However, this created a haven for criminal activities where escape routes were everywhere and anonymity was absolute. In response, the Police Service set up Secured By Design to combat the significant rise in burglary.

SBD started working with industry bodies and manufacturers to tackle the variations in the quality of the product being sold against the product that was originally tested. With SBD driving the market, it resulted in test houses being created and certification bodies set up to meet the demand. This work over many years has raised the awareness of the importance and benefits of security throughout the standards and construction industry. Today, products like doors and windows have to be certified by a United Kingdom Accreditation Service (UKAS) certification body before being considered